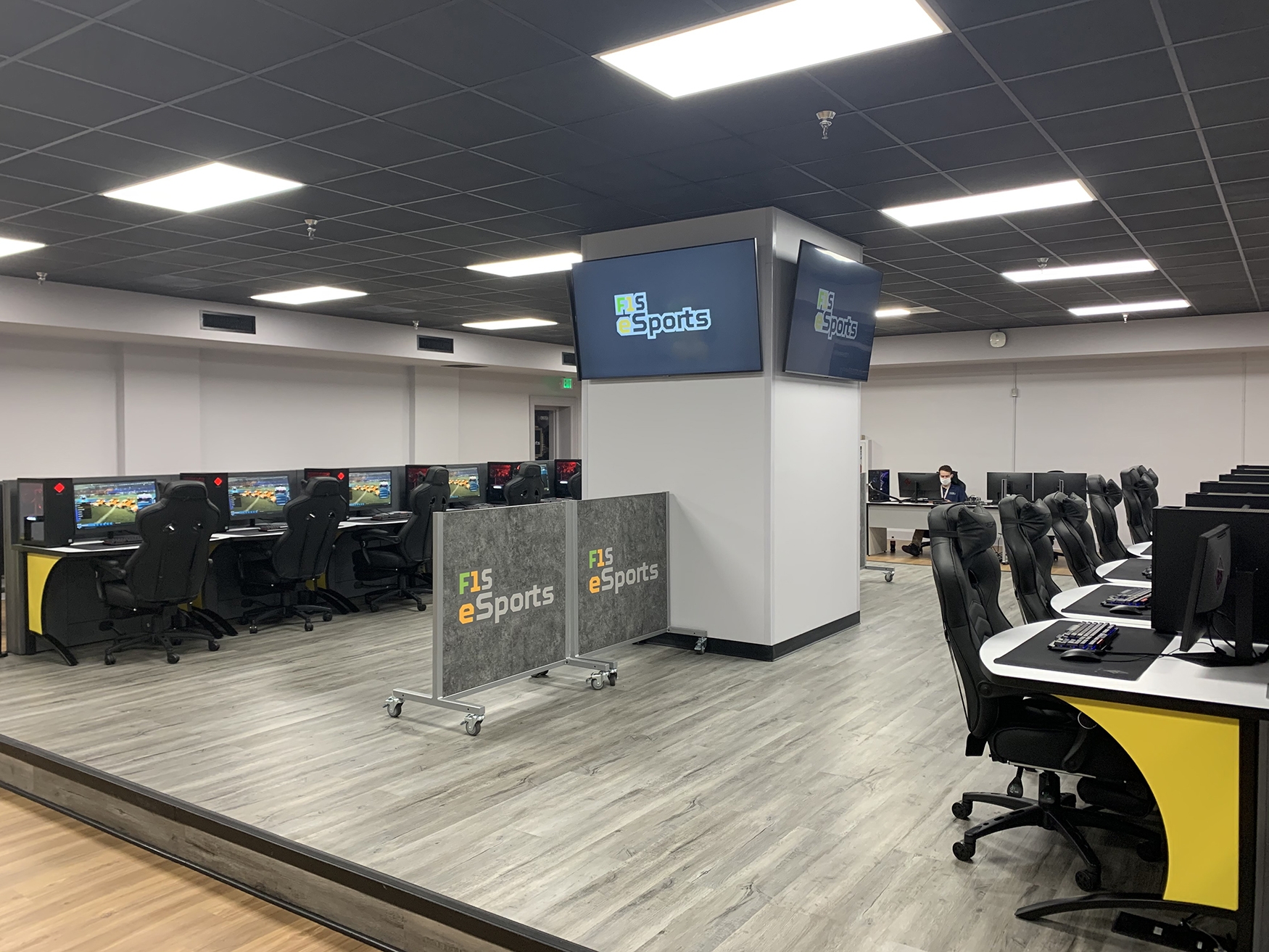 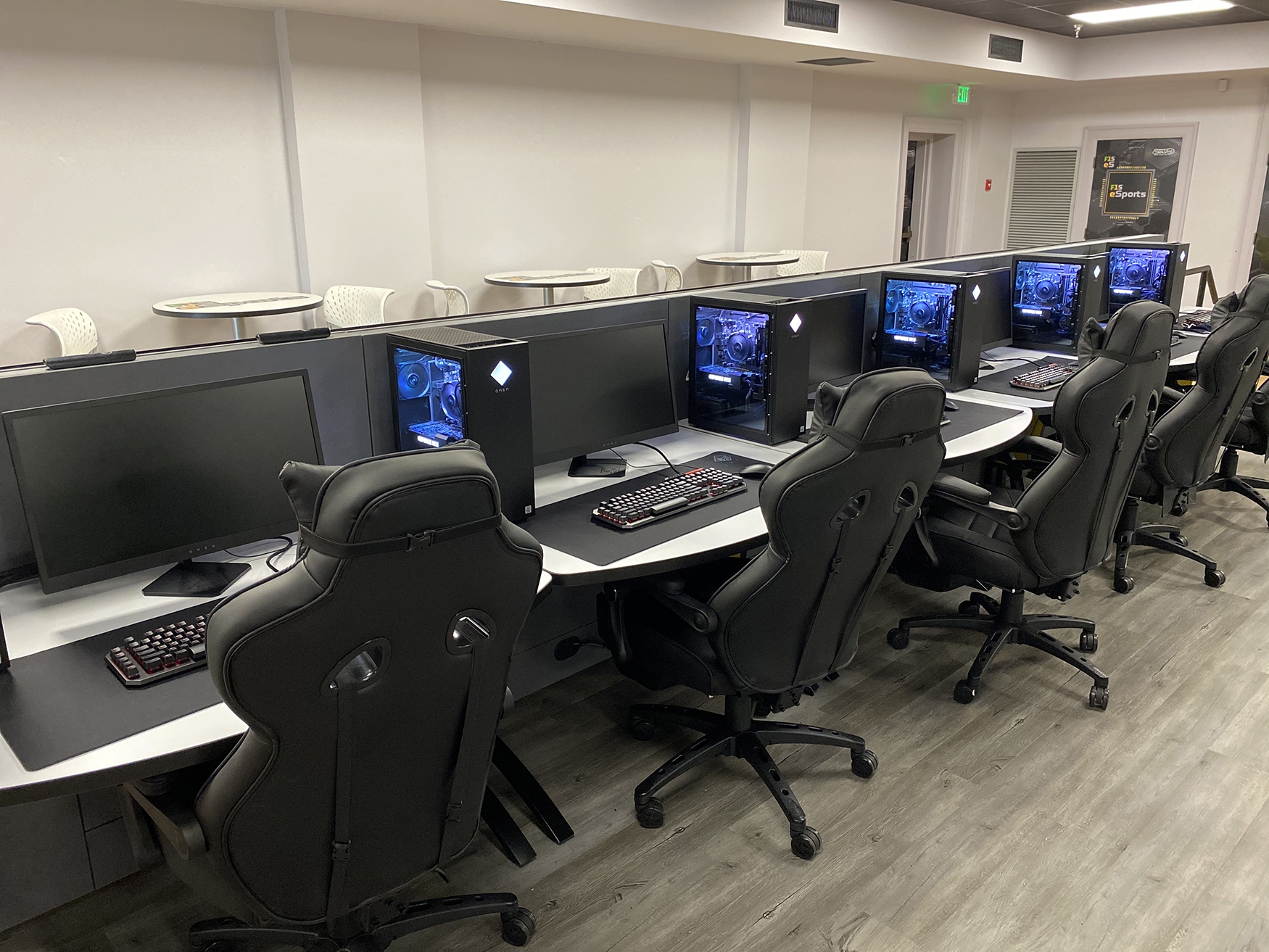 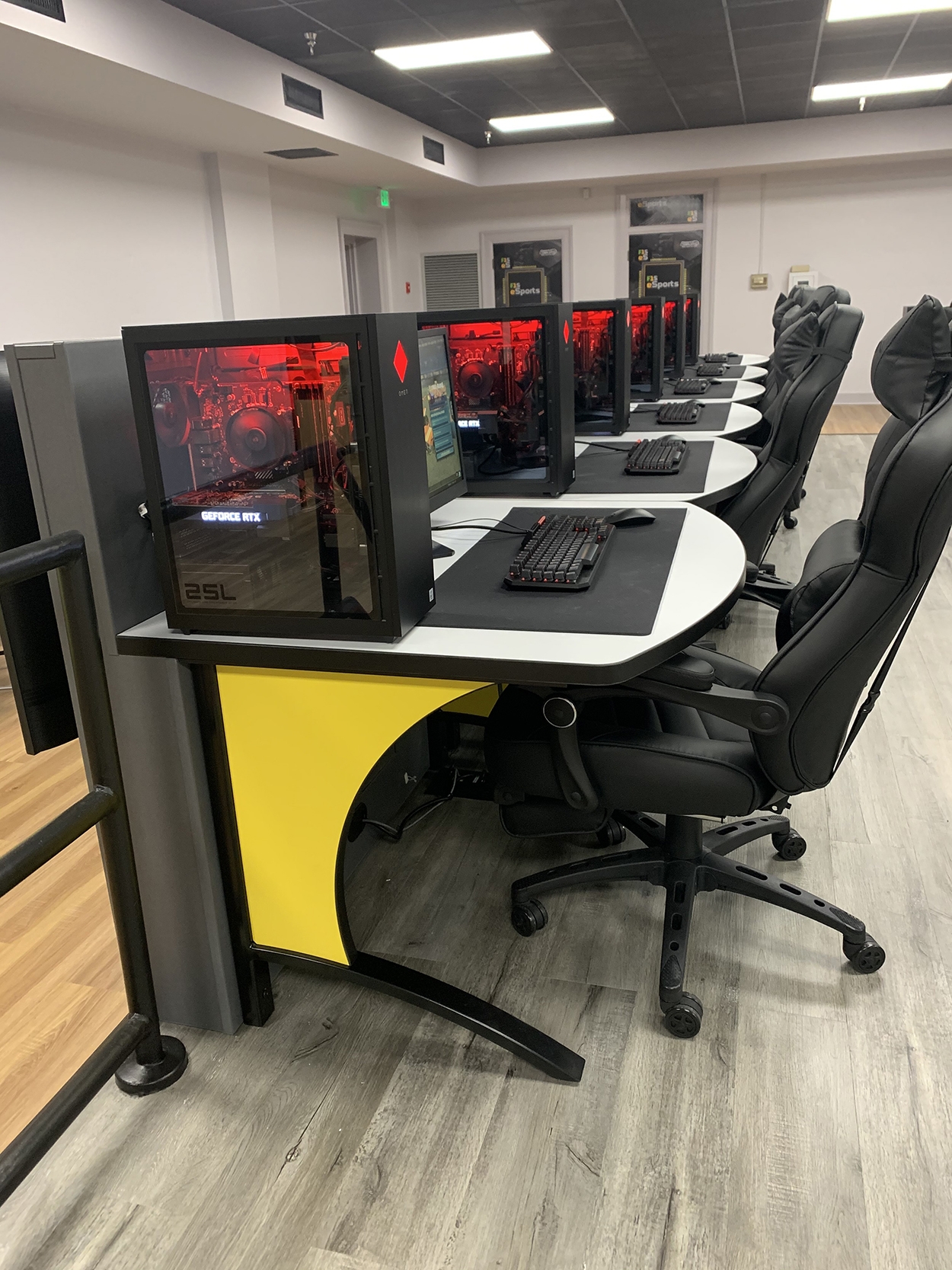 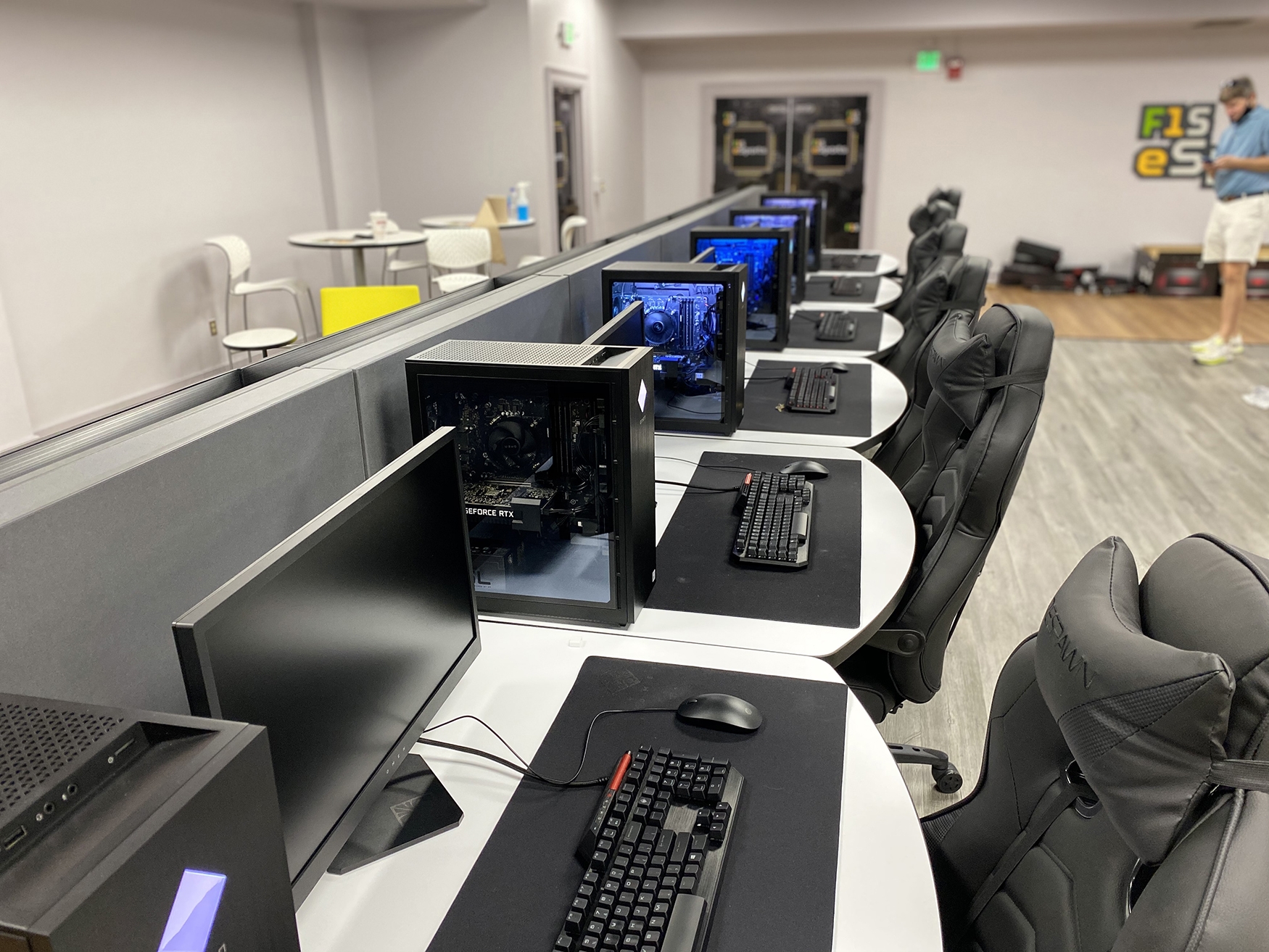 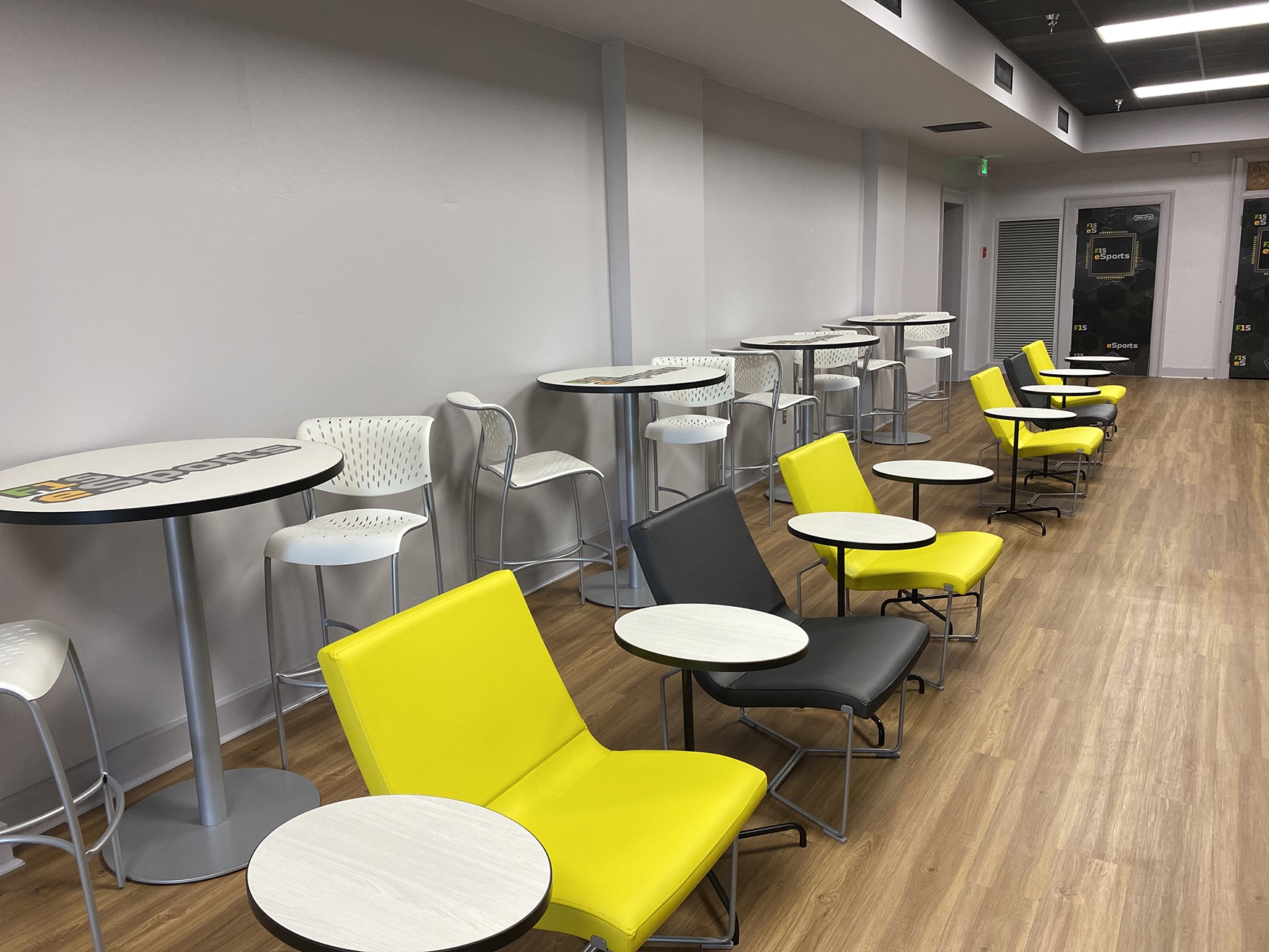 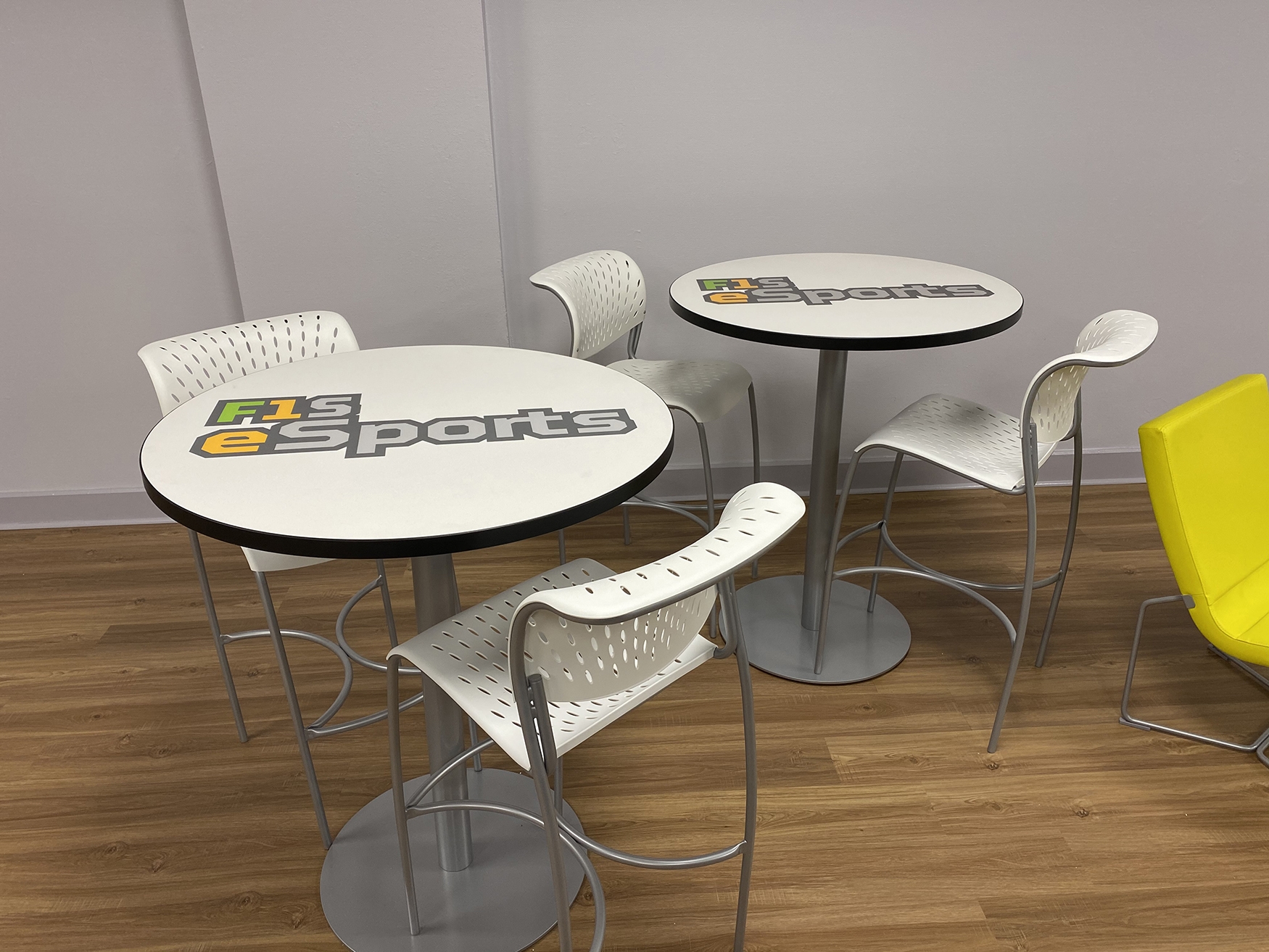 Cafe tables were customized with the schools logo. 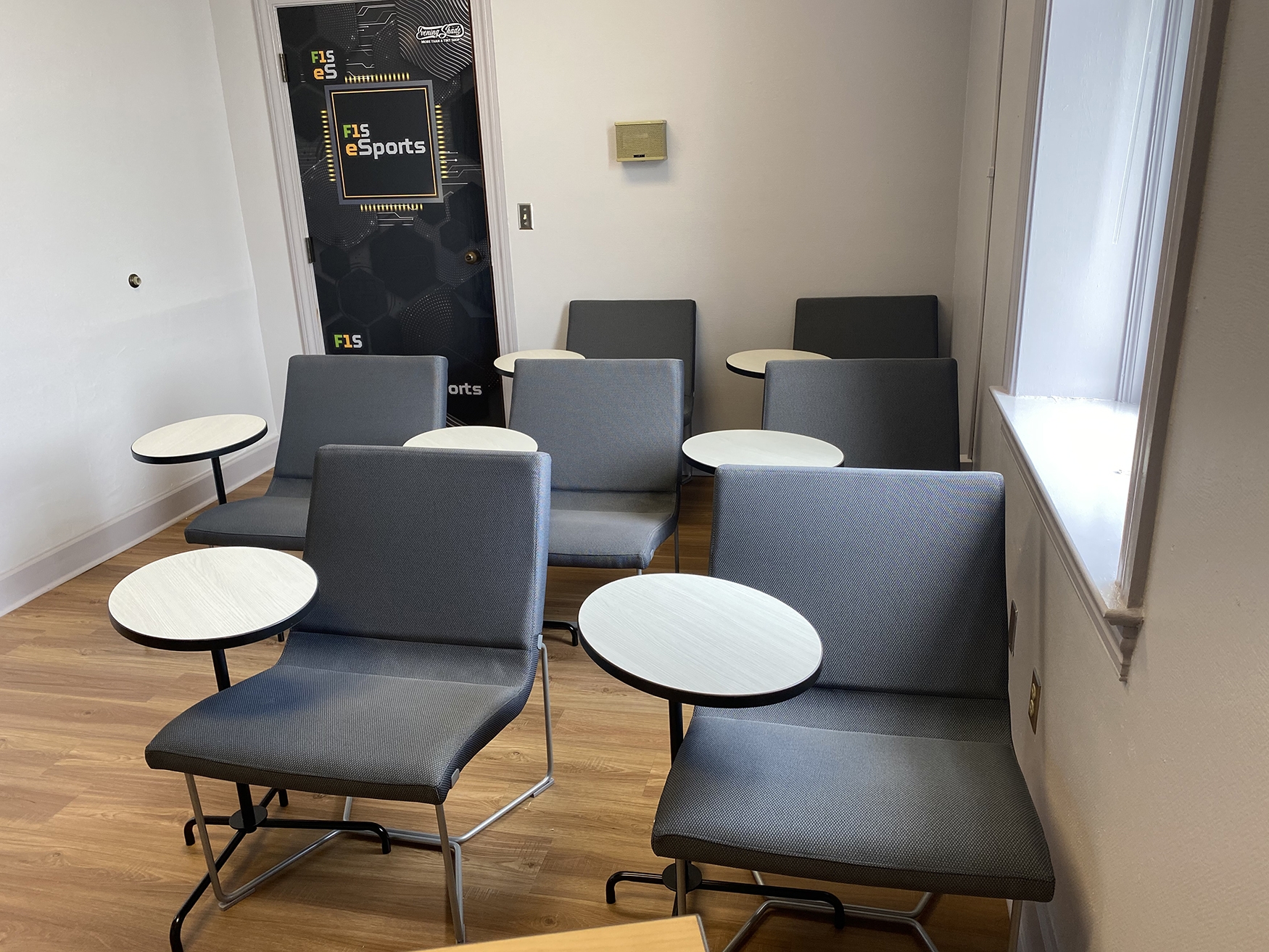 Team Meeting Room to provide an open and collaborative environment for strategy. 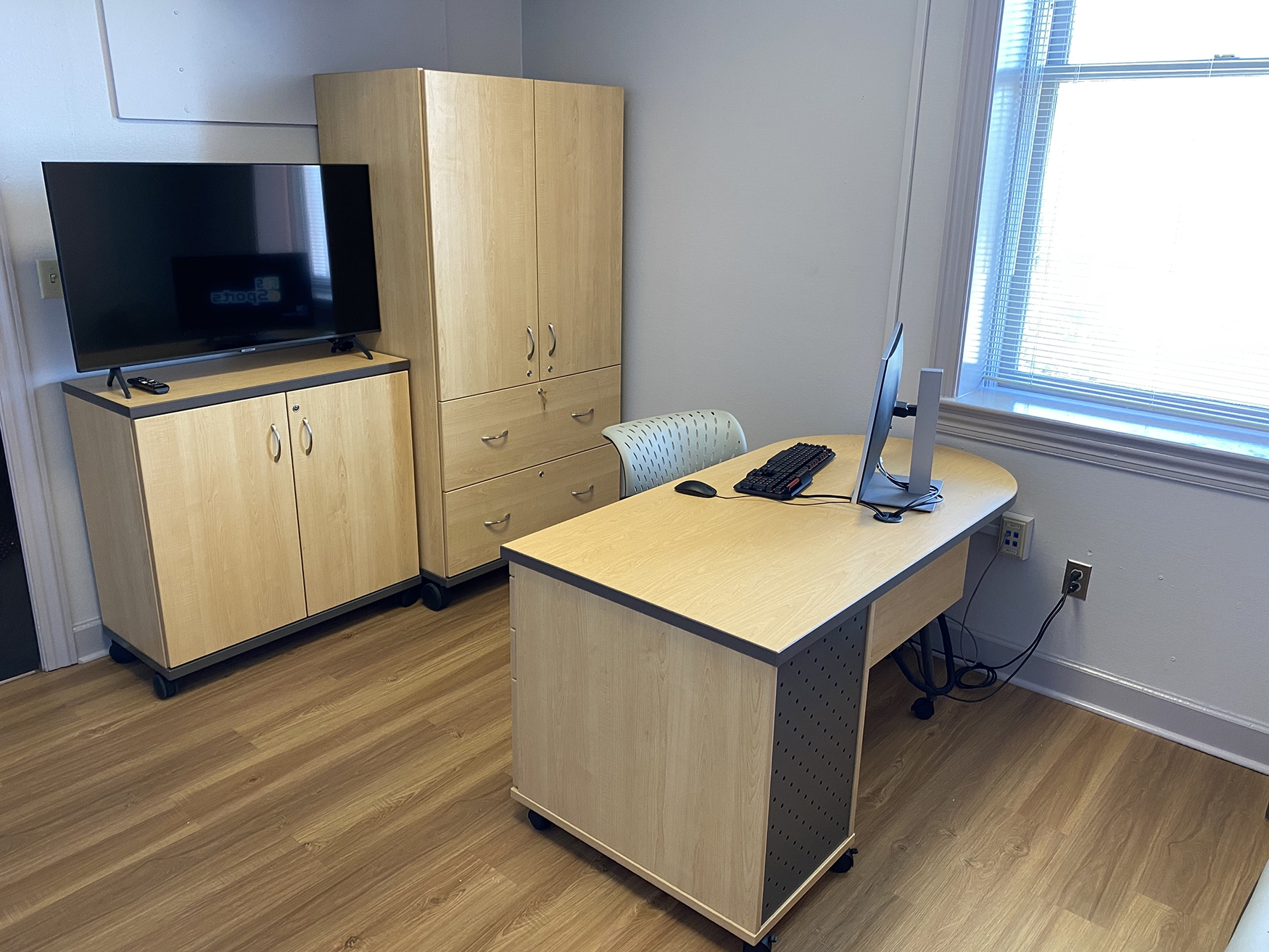 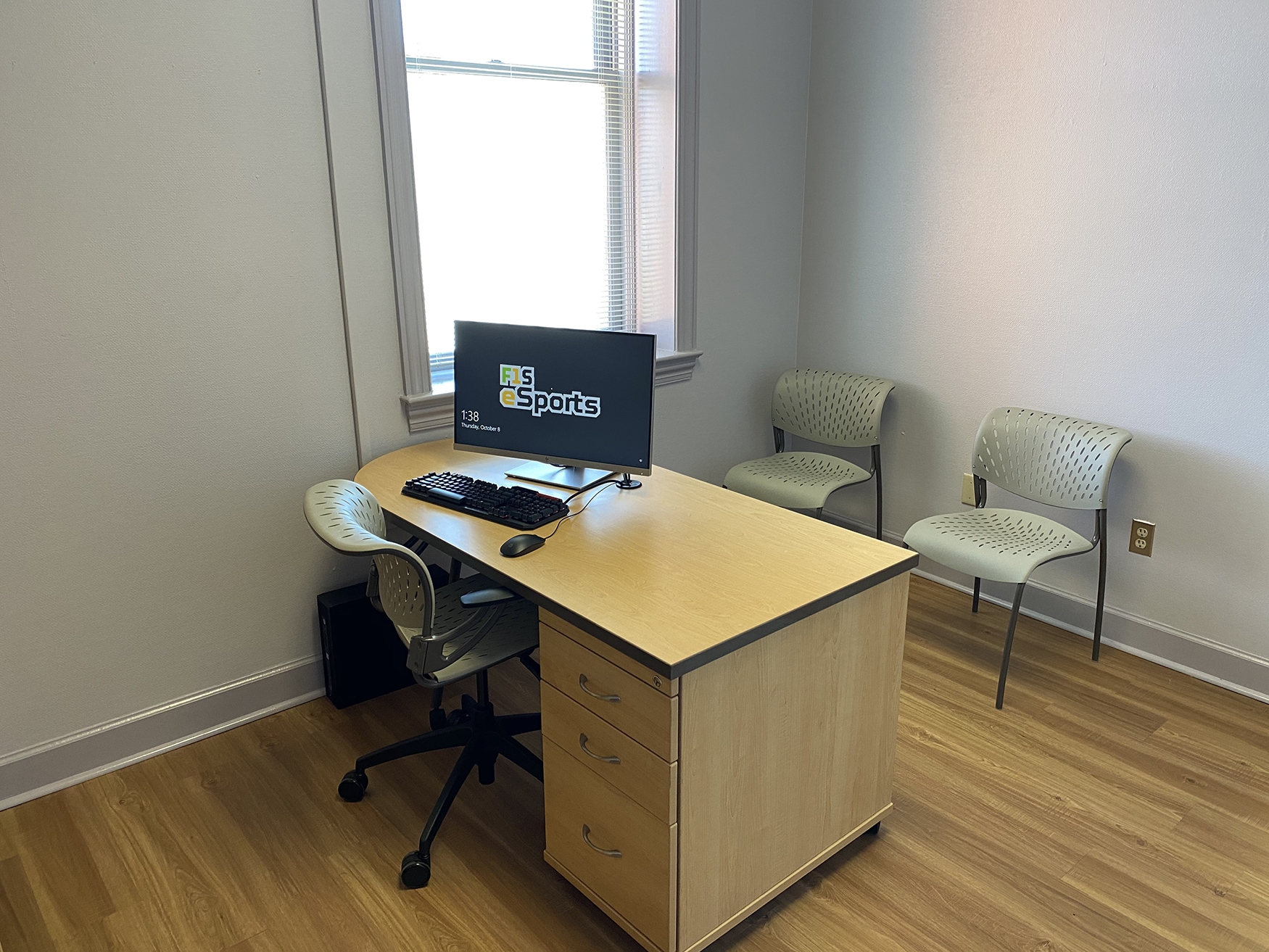 Discuss strategy with team captains, tryouts, broadcasting, or anything else the coach need his or her own space for.

eSports is organized competitive video gaming. Although eSports made its first debut in 1972, it began gaining momentum in the late 2000s and continues to grow among High Schools and Colleges.

eSports provides much more than gaming. Teams are decided via tryouts, just as a traditional sports team is chosen. It may vary by coach, but with Wyatt Howle, Systems and Security Administrator of Florence One Schools, it's more about interpersonal skills, drive and the players ability to learn and be a team player. The team does indeed have a team bench with subs at the ready and subbing will vary based upon which game is being played and each individuals skill set for that game.

Other important takeaways to remember with an eSports program is that there are real-world roles and skills to be learned that will transcend to any career. From broadcasting to video and social media management, the eSports program provides more learning opportunities than just the competition.

Wyatt introduced the idea of eSports to the districts Chief Technology Officer, Kyle Jones and the two began working behind the scenes along with Superintendent Dr. O'Malley to bring an eSports Arena to the district that would put the students and community first.

A Parnership Built on Trust

Pinnacle Network Solutions and mediatechnologies had previously worked with FS1 in 2019 to provide "the finest video broadcasting classroom in the state of South Carolina," said Brent Tiller of Pinnacle Network Solutions "and they came back to us for this eSports program launch because of our ability to be agile within their perimeters and meet/exceed the goals and timelines of the project."

Naturally, Brent reached out to Mickey Lay, Regional Sales Manager of mediatechnologies and "allowed us to meet with the key decision makers to truly understand the districts vision. This trust allowed us to bring the space to life!" said Mickey. Wyatt and Kyle put themselves in the seats of every user in the space to determine the wants and needs from every vantage point within the arena. mediatechnologies worked with them and suggested Mickey explains that through discussion we were able to offer "a table solution provided a cabinet to house wiring; with a cable channel for power and data. The cabinet would also hold a monitor on its front as the 'Gamers Jersey' that would provide player info to the fans.”

mediatechnologies, Pinnacle and FS1 worked together to put the students first. Intaking information and feedback from meetings, our designers used this information to begin the design process and after a few revisions we had the final design needed to begin bringing this project to life.

The spectator area really needed to mimic that of a traditional sports stadium and the Forum Lounge accompanied by cafe height ables and Hannah Stools provided a variation in seating height.

"We really enjoy the Spectator furniture, it's been designed to be armless to allow freedom of movement for anyone watching.

It allows the audience a really flexible space so that they can rotate about the room to see different athlete's points of view.

It also encourages more of a close community feel with the other people watching." - Wyatt Howle, Systems and Security Administrator FS1

The Team Meeting room functions as a strategy room, allowing discussion of what went right and what went wrong in a collaborative and open environment complete with Coach's area and space for film review.

The 6 vs 6 Stage accommodates 12 personal gaming station. Players are positioned in a way that separates them from the crowd and they have a sense of ownership of their station. Each station has table top power for any devices on the work surface and all wiring is hidden.

A broadcast station for students and a separate office for the coach is also available in this space.

When asked about Covid-19 and any protocols that would be implemented on the space, Kyle Jones responded by stating, all athletes will wear masks and work stations can be separated or an every other work station arrangement could be implemented. They haven't eliminated the use of Plexiglas in between stations but they are using a 360˚ sanitation device that is safe for all furniture and electronics.

The Growing popularity of eSports is becoming much more like a traditional sport. A few takeaways if your school is interested in starting an eSports program.

eSports is not an expensive program to run every year, and can easily turn a profit and it supports itself. You can have built in advertisements for generating income or the sales of apparel and also sponsorship deals.
Students can be involved in picking a mascot/team name and they’ll brand it and market it as well through social platforms or school stores.

ESPORTS vendors and leagues will help and are eager. Everybody is super eager to grow as a community.

Wyatt suggests conducting an interest survey first and maybe even start with as an after school activity or club first. Although a dedicated space can increase the professionalism of the sport, it doesn't have to be over the top elaborate.

mediatechnologies is here to help in anyway possible to bring your visions to reality. 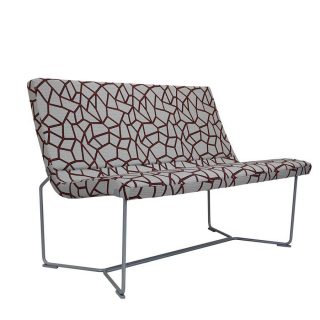 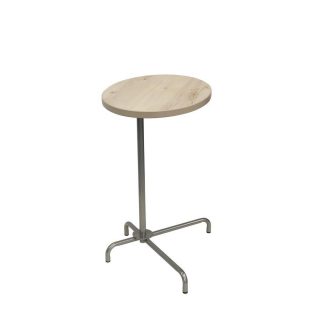 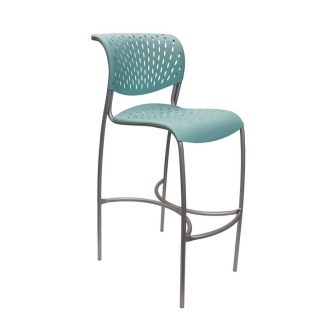 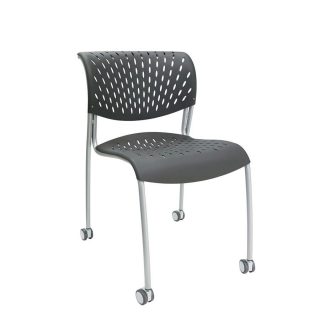 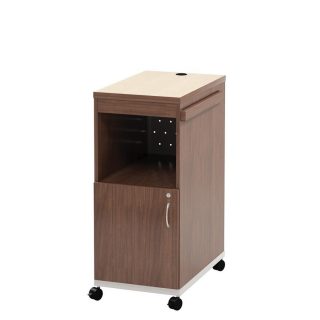 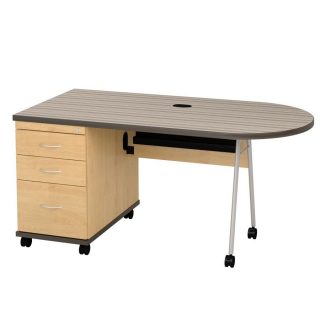